The SLR psych-pop road trip didn't need too much gas in the tank for the home territory show at Detroit Bar in Costa Mesa, joining those other vivacious darlings of the Orange County scene Brookline on the first night of their October residency...

Sean put in a storming performance - probably the best gig I've seen him play and the sound was excellent. The cohesive set included the five best songs from 'Evolutionary Sunset Call' plus another runout for the screamadelica stomp that is new song 'Is with a dub'... Great set and a wildly enthusiastic crowd for a change, the only disappointment being the omission of 'Gods don't worry' which I'm sure would have taken the roof off. The full set was:

I didn't catch much of Brookline as I was over at the merch table but their songs are starting to become more familiar and I think with the right producer to give them a slightly edgier feel the kids would dig them. But what do I know? 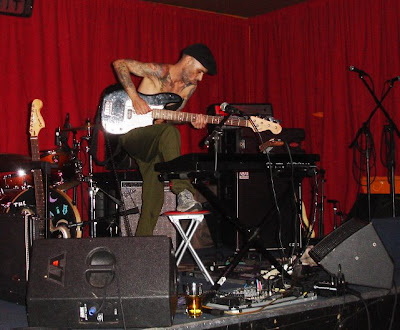