If there's any advantage to writing a blog that no-one reads it's that whatever you write is unlikely to come back to haunt you. However, there's always the possibility of being one Google search away from a black eye... And so last night I was talking to a vaguely familiar guy called Shane who is a friend of the Brookline guys. He mentioned that he was in a band (isn't everyone?) and they were called 'Free Lions'. I saw them a while ago at Spaceland and here's what I said:

"Free is supposed to be a magic number but there was precious little magic in evidence, except for wanting them to disappear. Marks out of ten? Is zero a number?"

I'm not sure I believe in karma but I brought a camera to the show with no memory stick! However, I will not be be softening my jornalistic stance - if I think your band is shite I will write about it in my blog without fear of reprisal.

Anyways STANLEYLUCASREVOLUTION picked the perfect set and were at their menacing, manic best. Samples of Sarah Palin being asked about the Bush doctrine took on a sinister note when played along the usual mixture of religious fanatics. Sean played the following:

Brookline sounded a little flat after the last couple of times I've seen them but apparently singer Brandon was a bit under the weather. 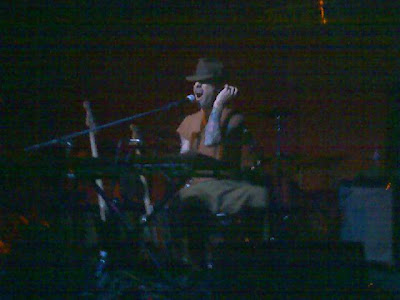