The Happy Hollows & Warpaint at The Troubadour

Both bands were excellent last night. Warpaint's ethereal post-punk groove got the evening started and the highlights of their set were 'Elephants' and 'Beetles' (do I detect an animal theme here?) Their rhythm section is one of my favorites (imagine Jah Wobble playing with Tony Allen) and is their advantage over bands like Bat for Lashes who tread the same ethereal path in the vocal department... 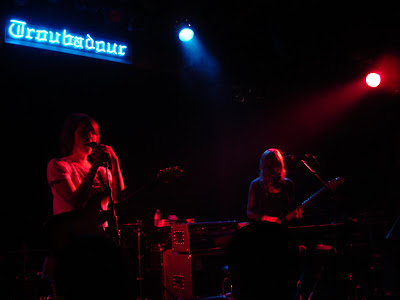 Powerpop/punk three-piece The Happy Hollows played a storming set of which the highlights were 'Tambourine' and a stunning version of the glam-rock tinged 'Lieutenant', which proved Sarah Negahdari is a great guitarist and not just a slightly batty singer who plays a bit of guitar. 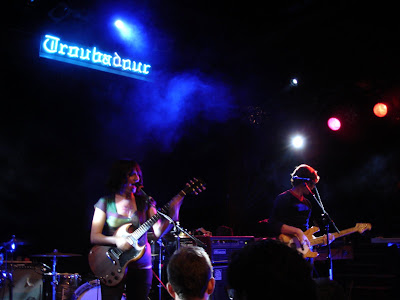 I didn't stick around for headline band Afternoons, a brief visit to their MySpace page earlier in the day showed they aspire to look and sound like Arcade Fire. Perhaps they should lower their expectations a little - if they try really hard they could be the next Bodies of Water...
Posted by Ian D.Matthews at 7:05 AM

You're wrong about Afternoons