SLR and DSS at eVocal

Book ended either side of the Stroboscopic guys were a couple of interesting bands/artists from Davis, California. Many Many Blogs was mainly a guy playing guitar and singing like a psychiatric patient whose medication wasn't working. It was entertaining though - particularly when a girl joined him to play thumb piano on one song which was excellent. Mucky the Ducky were cool too - a freeform ambient/free jazz experiment which at times sounded like György Ligeti's contributions to 2001. Good music to skin up to...

David Shane Smith was on top form. A few new(?) songs at the beginning which sounded as good as anything on Cloud Pleaser. My favorite song at the moment is the existential masterpiece 'Liqour Store' which was excellent, and the sampled 'Empty Action' sounded great too. 'Eyes' was good but lacked flexibility with it's drum machine backing - losing it's subtle tempo changes where the chorus drops off the beat. David told us he was ending the set on a downer as he amusingly dedicated 'Miserblism' to his parents! 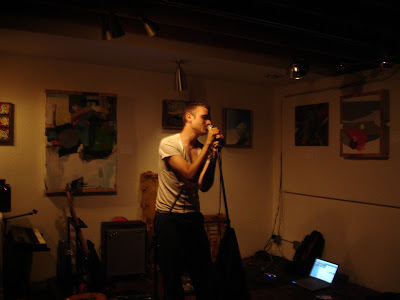 STANLEYLUCASREVOLUTION played a great set too... Not as polished as The Airliner a few weeks ago (the odd dropped loop etc) but it's always the unexpected stuff that makes SLR such an entertaining live act. Similar set to the last show plus a couple of additions, including the live debut of 'This World' - possibly his best (and most commercial) song since 'Gods Don't Worry'... 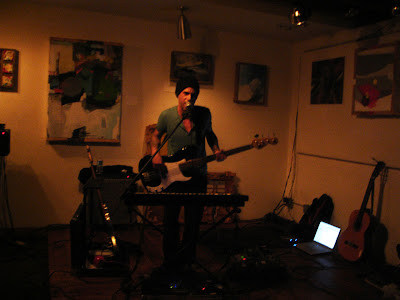