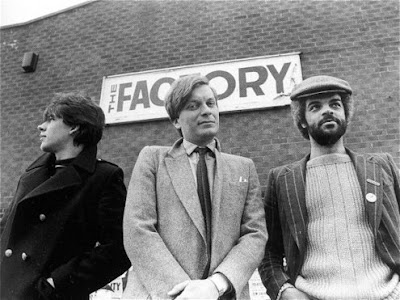 (Peter Saville, Tony Wilson and Alan Erasmus. Erasmus suggested the name Factory to Wilson after seeing a sign saying 'factory closing' and thought they should reverse the trend!)

CD2 covers 1981 (New Order's 'Everything's gone green' FAC53) to The Wake's 1984 release 'Talk about the past' (FAC88) and is predominatly filled with strange and wonderful dance music. From New Order's early forays into electronic music (culminating with the seminal 'Blue Monday') to the fractured funk of A Certain Ratio and the approximated bossanova rhythms of Swamp Children, CD2 is full of interesting stuff and is only let down by the appalling lyrics of 52nd Street, who spoil a great backing track with the cringeworthy refrain 'cool as ice, twice as nice'. The CD closes strongly with John Robie's remix of Cabaret Voltaire's 'Yashar', Mike Pickering's Quando Quango with 'Love Tempo' and finishes with The Wake, who sound spookily like Black Kids, although I guess that should be the other way round as The Wake were around some 20 years before Black Kids...

The Hacienda had opened in 1982 but was still mostly hosting bands in an almost empty club, but the seeds were being sown for a Manchester dance explosion that would take off in 1987.
Posted by Ian D.Matthews at 7:15 PM