Grace Jones & Of Montreal at The Hollywood Bowl... 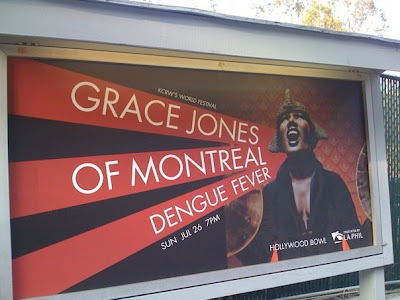 Dengue Fever, the Los Angeles/Cambodia band, were a typical KCRW World Festival opening act - world music with a chill-out vibe... Pleasant enough background music to uncork the wine to, although occasionally it sounded like a cross between a horror film soundtrack and music from The Water Margin. Oh well, I guess one should 'not despise the snake for having no horns, for who is to say it will not become a dragon?'

I'm not sure how Of Montreal got booked on 'World Festival' unless KCRW thought they were Canadian... However, their theatrical stage show was perfect for the wide expanses of The Hollywood Bowl stage. Indeed, any set containing an impecable cover of Bowies 'Moonage Daydream' and a wedding proposal between a dancer wearing a tiger mask and the bands keyboard player is well worth the admission fee!

Grace Jones was amazing! Or as some of the crowd would say "fierce"... A fantastic backing band; numerous costume changes each more fantastical than the previous and some great music! Particularly good were tracks off last years 'Hurricane' cd (criminally still unreleased in the US) which owed more than a passing nod to her Meltdown Festival cohorts Massive Attack, and even Serge Gainsbourg in places... More familiar were 'Love is the drug', 'My Jamaican Boy' and the epic closer 'Pull up to the bumper', although the house lights came on before Ms Jones could treat us to 'Slave to the rhythmn'...
Posted by Ian D.Matthews at 7:30 AM