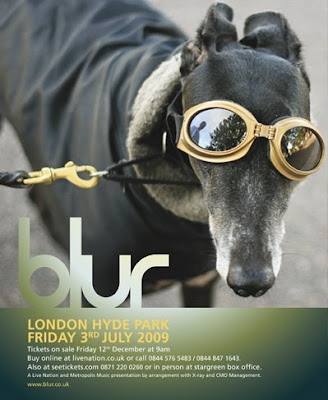 Deerhoof were a little frantic and complex for first band on a hot and sticky London afternoon... Not sure how many Can LP's the average Blur fan has - most of them seemed fairly bemused by the whole affair...

Florence and the Machine are the mystical Kate Nash... If Bat for Lashes are the new Kate Bush then FATM are the new T'Pau. The last song was ok - more dancy with some nice samples, but the rest of it was dire...

Amadou & Mariam really got the crowd moving - the blind Mali couple joined by some backing singers and a Western backing band that gave the African music a harder, more funky edge... Great stuff! Even Vampire Weekend sounded good as the sun began its slow descent but the kids by this time were getting rowdy waiting for Blur...

Blur should be congratulated for not leaving it too before 'reforming'... Indeed their trio of 'English' LP's (Modern Life is Rubbish, Parklife and The Great Escape) that celebrated (and deplored at the same time) the cult(ure) of being British in the 90's is every bit as relevant today as it was 10 years ago. The lads and ladettes came from the suburbs to Hyde Park(life) to drink, fight, snog and sing as if it was the Ally Pally or Mile End all those years ago. A lot of the kids there were probably too young to have seen Blur live before, and if anything, this added to the atmosphere much more than if the band and audience were a bunch of 40 year-olds who don't drink as much as they used to...

Personally, Blur were the soundtrack to my 1990's London life - through the Brit-pop years to 13 - dancing in Smashing next to Jarvis to 'Girls and Boys'; driving home through Camden and pulling up next to a beat-up silver mercedes and seeing Damon driving with Graham and Alex in the car; or chatting with Phil Daniels at the Blur 10 year exhibition in Hoxton Square...

Anyway, Blur played an amazing set... Everything sounded spot-on as the band were joined by various brass and backing singers including the obligatory Mr Daniels for Parklife. The setlist was: 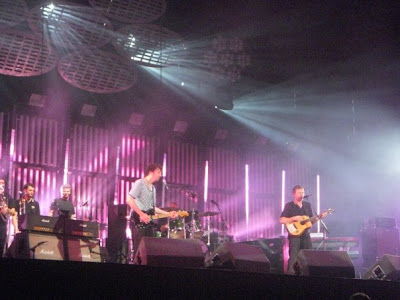 Labels: Amadou and Mariam, Blur, Deerhoof, Florence and the machine

would love to have seen it