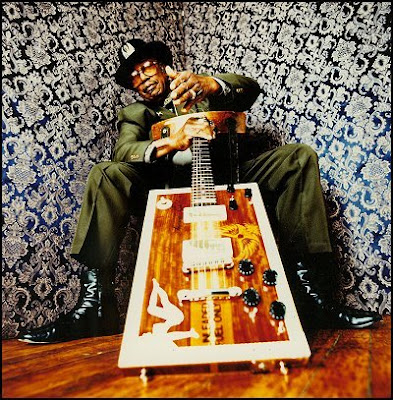 Johnny Marr talking about the Bo Diddley influenced 'How Soon is now?':

'How Soon Is Now?' was the one, though. I wanted to write a track with an intro that you couldn't forget, something that you knew straight away was The Smiths. In that regard it was very 'worked on'. I arrived at the studio with a demo of the whole thing, apart from the tremolo effect - though that was bound to surface on a Smiths track sooner or later, 'cos at that time I was playing Bo Diddley stuff everywhere I went. I wanted it to be really, really tense and swampy, all at the same time. Layering the slide part was what gave it the real tension. As soon as I played that bit on the second and third strings, John Porter put an AMS harmoniser on it. Then we recorded each individual string with the harmoniser, then we tuned the B string down a half step and harmonised the whole thing. The tremolo effect came from laying down a regular rhythm part (with a capo at the 2nd fret) on a Les Paul, then sending that out in to the live room to four Fender Twins. John was controlling the tremolo on two of them and I was controlling the other two, and whenever they went out of sync we just had to stop the track and start all over again. It took an eternity. God bless the sampler, 'cos it would have been so much easier! But it was just one of those great moments. When Morrissey sang the vocal it was the first time we'd all heard it. John Porter said, 'Oh, great - he's singing about the elements! I am the sun and the air...' But of course it was really, 'I am the son and the heir/of a shyness that is criminally vulgar'... A great track.
- Johnny Marr, The Guitar Magazine, January 1997
Posted by Ian D.Matthews at 8:12 AM