The Cure at the Hollywood Bowl

Apart from owning (at some point in the distant past) the 12" of 'A Forest' and tapes of 'Head on the door' and the 'Standing on the beach' I wouldn't exactly call myself a Cure fan. However, I enjoyed their Hollywood Bowl show despite our seats being in a different zip code than our seats for REM (courtesy of Daniel McCoy who is Peter Buck's cousin) and it being a three hour show (4 encores!) Unlike REM (who loaded all their new material at the start of the gig) the set was a perfectly paced mix of old and new songs. The band sounded spot-on (except a half-hearted Love Cats) and Robert Smith's singing was faultless. His look? Well, it is what it is - a fat bloke wearing makeup, although it may be time time to get the hair cropped again!

65 Days of Static opened up - a goth/emo/shoegaze instrumental combo... They were very average - bands like The Workhouse do this kind of thing 100 times better...

In search of a cure for acrophobia! 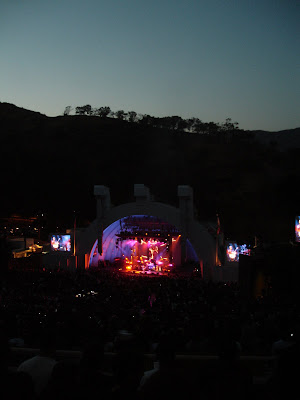 Sneaking into the garden section for a closer look! 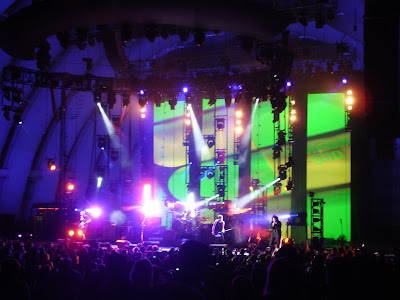 I too was at the Cure show (actually sitting next to Ian)and agree with all comments posted, but would like to add that the show was three hours long and they stopped serving alcohol at 9:30PM.
I was still thirsty and willing to help THE HOLLYWOOD BOWL by drinking some of the excess beer.
P.S. The original name of the band was "THE EASY CURE".

We were saved from ourselves Hec! But they could have given us another half hour...