Thom Yorke at the Orpheum Theater

Thom Yorke and friends put on a great show last night in front of a packed house which included the likes of Toby Kebbell, Rhys Ifans, Charlize Theron and husband Stuart Townsend. I resisted the temptation of approaching Kebbell in the bar and asking "Dead Mans Shoes - what the fuck is all that about?" although a post show "job's a good-un" (from Control) would have been more applicable.

Yorke and Co ran through The Eraser from start to finish and everything sounded amazing especially the title track, 'Black Swan' and 'Harrowdown Hill'... Flea's percussive bass added an extra dimension to the songs, and combined with Nigel Godrich's sparse synths the music had an early Simple Minds or Japan feel. However, the layered percussion throughout was definitely Radiohead flavored.

The encore (Yorke solo for 3 songs and then the full band back for 3 or 4) was a little after the lord mayors show but short of playing some beloved Radiohead songs I don't think they could have bettered The Eraser part of the show... 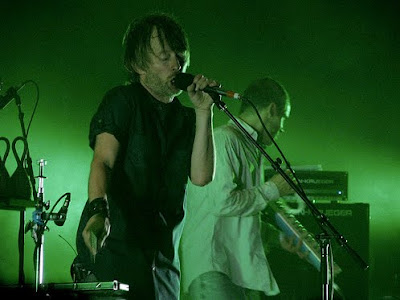