Anyone in LA between October 17th and November 14th should check out a new exhibition by the multi-talented artist/musician/hipster Faris McReynolds: 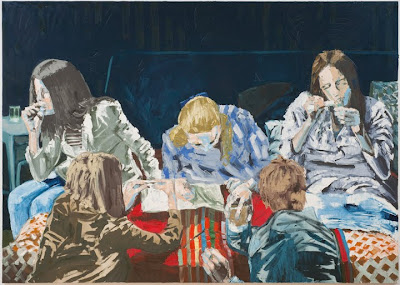 Here is the press release from the Roberts & Tilton gallery:

Opening reception for the artist: Saturday, October 17th, 6 to 8pm
Roberts & Tilton is pleased to present The Primitive Electric, an exhibition of new paintings by Faris McReynolds.

In his third exhibition at the gallery, Faris McReynolds continues his exploration of imagined space and time, manifesting multiple ideas and ways of seeing through the literal movement of paint on the canvas. This recent work stands as an embodiment of culture, addressing specific themes of alienation, boredom, restlessness, partying and escapism.

There’s a sense of aimlessness about these portraits as each one resists a simple narrative reading, opting instead for a more expansive, albeit more complicated view of the world. McReynolds desires to paint in a primitive manner, yet this “primitivism” derives less from stylistic choice than from the intention to communicate multiple versions of the world at once.

Here the traditional portrait is turned on its ear as figures merge into one another, blurring literal and cultural boundaries, exposing their bodies in weirdly grotesque ways, yet without shame. McReynolds wants nothing more than to allow these paintings to communicate freely on a variety of levels, and each exists as a visual testament not to the artist himself but to the vagaries of a flawed and failed culture.

Born in Dallas Texas, McReynolds has shown both nationally and internationally at Goff & Rosenthal in Berlin, Gallery Min Min in Tokyo, and the Tim Van Laere Gallery in Antwerp.
Posted by Ian D.Matthews at 10:39 AM