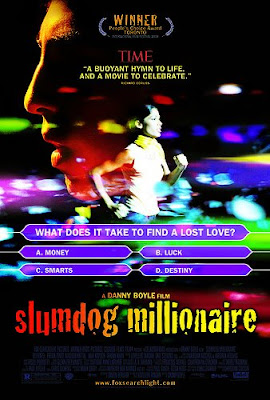 Danny Boyle's Slumdog Millionaire is a great film. Set in India, the movie tracks the exploits of two brothers and a girl they 'adopt' growing up in the slums of Bombay (later Mumbai.) The younger brother Jamal appears on 'Who wants to be a millionaire' and the answer to each question is expertly related via flashback to events of the trio's adventures growing up in (and trying to escape) the slums... On the verge of the final question the show ends for the day and Jamal is arrested on suspicion of cheating - after all, how can a boy who grew up in the slums possibly know the answer to all these questions! The older brother Salim has meanwhile become a runner for the local gangster and the girl Latika they grew up with is more or less a prisoner as the gangster's girlfriend. Slumdog Millionaire is essentially a love story between Jamal and Latika - Jamal trying to find the girl (after the two brothers lose touch) by appearing on the world's most famous TV show.

The film is visually stunning and the casting is amazing - each of the main characters is played by three actors as the children grow up... There are definite nods to Trainspotting in Boyle's black humour and also Fernando Meirelles' 'City of God' in the lawless dog-eat-dog world of the slums.
Posted by Ian D.Matthews at 1:30 PM