Oasis at The Pearl 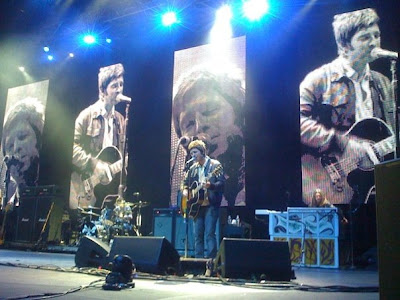 Matt Costa pops up occasionally supporting English bands touring the US - he needs to stop. Sure, his acoustic musings have an English flavor - Billy Bragg, Syd Barrett and Nick Drake to name but three but the dude (I use this word only in context) is from Huntingdon Beach for gods sake!

(B)Ryan Adams and the Cardinals sound like Diesel Park West - in other words, what U2 sounded like when they discovered America. However, they are more 'Rattle and Hum' than 'Joshua Tree'. Bryan does sing like Bono but his "nobody likes us" routine is a little tiresome: we don't - get over it!

Oasis played exactly the same set as the LA gig but I don't think anyone cared as they were fantastic from start to finish. The smaller venue and standing crowd contributing to a great and celebratory atmosphere. Both Gallaghers seemed in a better mood and Noel was even quite chatty in places - no doubt happy to have his entourage such as Russell Brand and Ricky Hatton sitting in the closest section of seats.
Posted by Ian D.Matthews at 6:38 PM