The Rhone Occupation at Spaceland

I think I'm getting to grips with the new camera - I even got a couple of shots of The Rhone Occupation facing the audience which is no mean feat. Apart from a shyness that is criminally vulgar, the pacing of their set left a little to be desired - after a spritely opener things came to a brief stop with the slow Radiohead-esque 'Would It Kill You To Talk This Out' coming far too early in the set... Anyways, TRO picked up the pace and finished strongly. Kevin Bronson seems to like them, but then he likes everyone doesn't he? 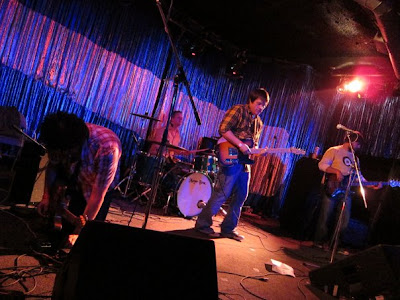 Before TRO were the garage rock chics Wet and Reckless, who I didn't hate as much as I was expecting. Their sixties pebbles sound owes a little to the Velvets, but apart from that had few redeeming features. I have to say the drummer is appalling but that's probably the point isn't it? Whatever, at least I have a new pickup line - "are you wet and reckless?"
Posted by Ian D.Matthews at 8:39 PM

I can agree with the review, but in the end, a pretty good show. They probably should have kept it rocking hard for the first 3 or 4 songs, something they do better than most bands these days. Hope spaceland hosts them again.

Definately a good show which perhaps didn't come across in my review...