The past is written... 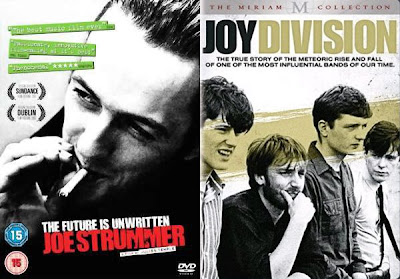 Grant Gee's 'Joy Division' and Julian Temple's 'The Future is unwritten' are excellent and comprehensive documentaries of Joy Division and Joe Strummer respectively. Much of the footage has been seen before but these documentaries will be seen as the definitive article.

Although both compelling, Strummer's story is a better movie - probably because Temple had more options with the large amount of footage shot of The Clash and Strummer; concerts, TV appearances etc. Indeed Strummer 'narrates' much of his own story via excerpts from interviews and the soundtrack in skillfully lifted from Strummer's World Service show 'London Calling'... There are many interviews from family, friends, and band mates - although Paul Simonen is a notable exception. The soundtrack is excellent with a diverse selection of world music, dub, reggae and rock 'n' roll, although the most electric moment is at the start of the film when Strummer is in the studio singing 'White Riot' - the gnarled acapella version suddenly jumping to blistering life when the audio swaps to the finished record.

Unfortunately, footage of Joy Division is scarce and indeed all of the concert footage that does exist is of very poor bootleg quality. However, the grainy live footage presents a stark contrast against the excellent quality TV performances! In particular, the 'Something Else' performances of 'Transmission' and 'She's Lost Control' are stunning and in the couple of months between the 'What's On' and 'Something Else' TV appearances Curtis has evolved from an intense but somewhat shy front man into an idiot-dancing maniac. The change in Curtis in two months is incredible - a recurring theme in the documentary (particularly during interviews with the other members of Joy Division) was that more could and should have been done to help the ailing Curtis. However, as Peter Hook in particular tells us: they were just kids who wanted to play music in a great band. Also, no-one was fully aware of what was happening to Curtis, either medically (with his epilepsy) or emotionally, with the breakdown of his marriage and guilt over his affair with Belgian journalist Annik Honore. Ms Honore appears in the documentary and speaks candidly about her relationship with Curtis and how she seemed to be the only person who realized the lyrics to second LP 'Closer' were tantamount to a lengthy suicide note. Also of interest are Bernard Summer's legendary regression tape that he made with Curtis shortly before he died, and interviews with Kevin Cummings and Anton Corbyn, whose photography did much to shape the public image of Joy Division.

Many of the Manchester locations in the Joy Division story no longer exist and this is ironic as the late Anthony H. Wilson credits JD being a catalyst in the rebirth of Manchester as a great city. Wilson died before the documentary was released and indeed the ultimate JD story would have also included interviews with the late JD/New Order manager Rob Gretton and the late legendary madcap producer Martin Hannett...
Posted by Ian D.Matthews at 12:10 PM