ExDetectives/stanleylucasrevolution/David Shane Smith at The Airliner 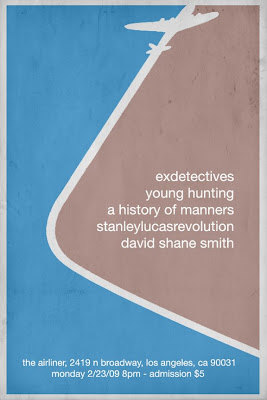 David Shane Smith continues to amaze me! This is the third time I've seen him play live and each time he throws in 4 or 5 songs I've never heard before - all equally strong. The acoustic songs sounded particularly good last night and I wish he had played a few more to take advantage of the great sound at The Airliner. Anyway, the more electronic songs were good too although David was guilty of a little noodling in places... 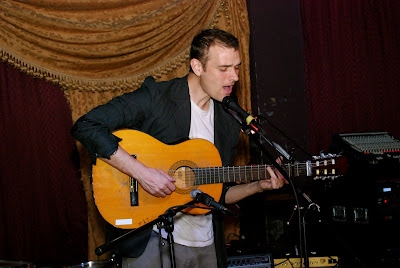 SLR also sounded brilliant - best sound Sean has had for a long time. The set was perfect - all the hits and more: 'New Stone 40', 'We Still Love Them', 'Gods Don't Worry' and forthcoming EP's 'Lost on the way home' and 'Demolition 45'. Really tight set - all meat and no fat! 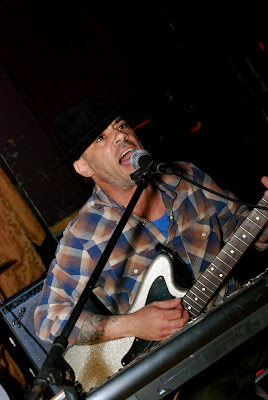 Next band was Young Hunting. I saw them previously at the Echo Curio but didn't stick around then as they were defeaningly loud. Thankfully they were better mixed last night and they opened with a song I remembered - a catchy ditty somewhat Radiohead in style... I lost interest after that - no real audio identity which wasn't helped by much swapping of instruments and singing duties...

ExDetectives were without bass player Meriah but stand-in John(?) did an amazing job to learn the set in a couple of rehearsals. The change in bass player resulted in a more (ahem) ballsy sound which worked well at times but in the quieter numbers Meriah's melodic and subtle playing was missed. Nice to see 'The Crown' get an outing but it's placement at the end of the set made it seem like an afterthought...

A most enjoyable evening!
Posted by Ian D.Matthews at 7:49 AM

slr was really great last night, maybe the biggest ive heard him sound at a show. and yes, we had two balls too many!