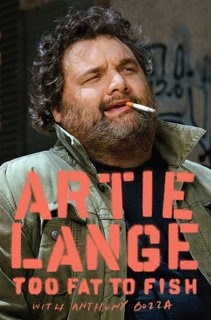 'Too Fat to Fish' is comedian Artie Lange's biography... Lange is the larger than life alcoholic, drug (and food) addict regular on the Howard Stern radio show. Lange makes a good case for his clutching defeat from the jaws of victory mentality being a result of the serious injury and early death of his father (he fell off a roof and was a quadraplegic...) but it's likely purely down to his addictive personality... Most of the stories revolve around the addictions to Cocaine and later Heroin which threaten to destroy his career. The book is no Straight Life, but there are some amazing stories like driving through Malibu on a lunch break from MadTV dressed as a pig (including prosthetic snout) to meet his dealer to buy coke... 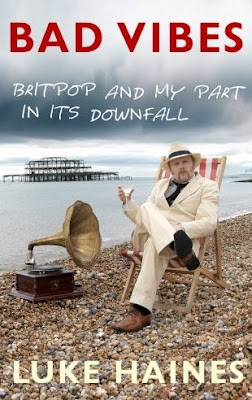 'Bad Vibes: Britpop and my part in its downfall' is Luke Haines superb memoire of the 90's, from The Auteurs early trailblazing of the scene (along with Suede) that would evolve into Britpop, through to his terrorism concept album Baader Meinhof... Britpop (and Haines hatred of...) is a common thread through the book and at one point Haines fires a flare from a hotel balcony at Oasis and their roadcrew frolicking in the hotel pool... Haines is equally unhappy on tour (where he avoids the majority of his bandmates) or at home, where his life has more than a touch of Withnail and I... A great read - almost on a par with Julian Cope's Head on/Repossesed and I look forward to the follow-up, which should start with the seminal How I learned to love the bootboys...
Posted by Ian D.Matthews at 10:38 PM