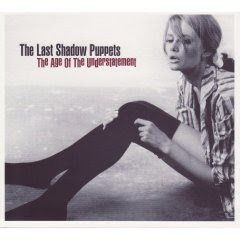 I was interested to hear The Last Shadow Puppets. Tales of Scott Walker, Bacharach, Spector and Morricone influences made the project an interesting concept. I heard a track from 'The Age Of The Understatement' on the way home today. 'My Mistakes Were Made For You' was pleasant enough but one Scott Walker bassline does not a summer (of love) make... Borrowing the bassline from 'The old man's back again' is no bad thing, and with a few Bacharach key changes and some Wally Stott strings the backing track was pretty good. However, any wall of sound was paper-thin and however much reverb you put on Alex Turner's vocal it still sounds like the Arctic Monkeys - albeit at a more pedestrian pace. Turner's strength is his lyrical rat-tat-tat wordplay which works great on a faster song but was nothing special on a slower track. And like so many other records these days it sounded like a 21st century recording trying to sound like it was made in the 60's... Nostalgia ain't what it used to be - ask Scott Walker!
Posted by Ian D.Matthews at 7:24 PM