In a night of appalling band names Moxy Phinx (get it?) opened and proceeded to steal the show. An empty stage with a few chairs could hardly prepare you for what was to follow as one of the dancers dramatically strode on and pressed play on a MACbook in the corner... More interpretive dancers arrived on stage along with singer Katrina Lenk (aka Moxy Phinx) who was dressed like an evil Disney Queen. The music was a wonderful blend of classical, subtle electronica and reverb drenched piano, which particularly featured on a brilliant version of The Pretenders 'I go to sleep' - the song elevated to greatness by an emotive vocal over the ghostly piano. The dancers left the stage for a few songs leaving Ms Phinx alone to sing a couple of more upbeat numbers (which reminded me a little of St Vincent or Emiliano Torrini) before returning to dance amongst the audience as the set finished. 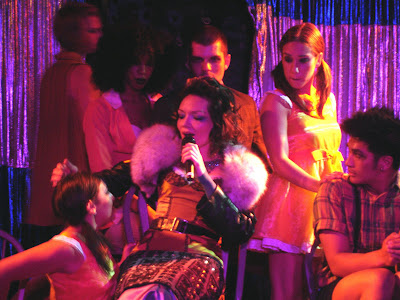 Quazar & the Bamboozled are obviously going for that whole Dr John or Captain Beefheart vibe and despite having the look down pat (including top hat!) they have neither the blues of the former or eccentricity of the latter. Stripped of these facets what you basically have is an average version of The Commitments... 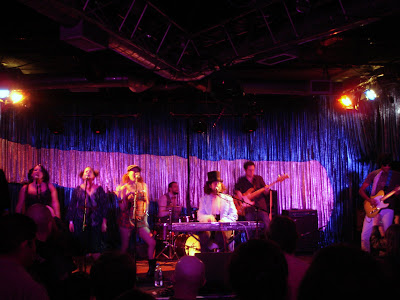 Music and comedy can be uncomfortable bedfellows, particularly when something is not funny and the music sounds (as every musicomedy group does) like a cross between Spinal Tap, The Rocky Horror Picture Show and Bat out of Hell... So basically, the hour The Fuxedos (get it?) spent on stage was possibly the worst hour of my life. The singer was sooo desperate to be funny it was excruciating. I was miserable... 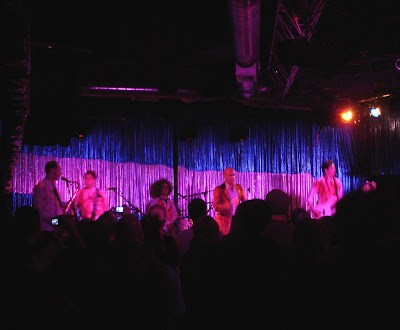 I wondered earlier in the day whether Spaceland would be the best place to see situationist avante jazz band Killsonic. You take away the situation (for example last weekends Prop 8 march) and put the band in a closed environment and you have a marching band without a march, rebels without a cause - a prep rally for hipsters! I'd like to see them again, on a march with the rubber bullets flying... 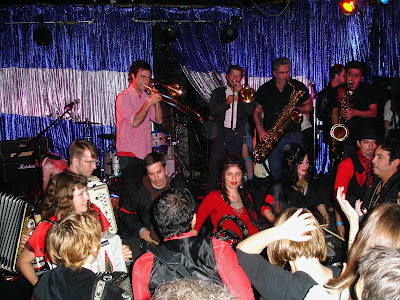 music is the cause....and they are not a marching band ....they move but have no baton twirlers...nonetheless a bad place to see killsonic....spaceland sucksssss!!!!!!!

Semantics - a band who marches is a marching band.

Spaceland is ok - just not the right venue for Killsonic!

Captain Beefheart? Bat out of hell? Thanks for the obviously well-informed, intelligent review. Apparently, the 300 - 400 people there who loved the show have no taste whatsoever. Good thing they've got you to show 'em the way.

Well, the capacity at Spaceland is 260 but whatever. It is possible the people who did enjoy it have no taste - that had crossed my mind...

I don't really see how the The Captain Beefheart reference would bother you as it is about Quazar and the Bamboozled. As for Bat out of Hell I would take that as a compliment compared to Spinal Tap.

Good luck with the cd - I think you'll need it but that's just my opinion...

Captain Beefheart has absolutely *nothing* to do with Quazar and the Bamboozled; it's one of many awkward, inaccurate points of reference in your little smear job of a review, and serves as an excellent illustration that you have absolutely no idea what you're talking about.

Interesting that you chose such a sourpuss of a pic to represent yourself. You were apparently a miserable lil' island in a sea of joy there at Spaceland, and you felt so miserable that you needed to share your misery with the world. Yay, blogosphere! A troll with his very own blog!

Or maybe you're just envious that we had more people present that night than you've had read your blog in the two years (!) you've been blogging.

Good luck with your blog -- I think you'll need it but that's just my opinion...

You've obviously never seen a picture of Captain Beefheart or listened to his music... anyway...

Actually, I do take part of the review back. It wasn't the worst hour of my life - that would be reserved for something important rather than an irrelevant joke band.