After the strange but wonderful Mr Heggarty we moved forward to get a good spot for Paul Weller. Quite funny really to see a few hundred aging sunburnt brits wedged at the front and no-one else within 50 yards of the stage... As the sun set a big crowd appeared out of nowhere as Weller took the stage at 7pm.

Weller played a great set including storming versions of 'Eton Rifles' and 'Changing Man' plus a dubbed out version of 'Wild Wood'... As 'Wild Wood' was reaching it's climax I saw a familiar face behind the stage - Johnny Marr!! Marr came on to rapturous applause and played on a spritely version of 'Town called Malice'... The only thing that could have topped that would have been an appearance two days earlier with Moz!

My Bloody Valentine were excellent - the sheer volume slightly easier on the ears in an outdoor venue. Earplugs were still necessary, particularly in the apocalypse section of 'You made me realise' which I forgot to time, but seemed to go on for about 15 minutes. As the apocalypse was raging we started to walk across to the second stage to see a bit of Public Enemy, who perfomed their seminal album 'It Takes a Nation of Millions to Hold Us Back' in full. It was quite fitting as they started 'Bring the noise' during the MBV onslaught!

Watched some of The Cure but wasn't really into it having seen them recently... 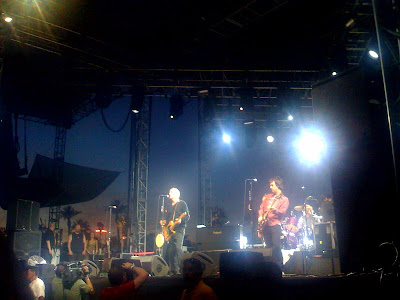